Curious King's Cross
Raving at Bagley's
to stimulate your appetite, we are posting here an extract
from Curious King's Cross by Andrew Whitehead -
it is on sale at OWL BOOKSHOP in Kentish Town and HOUSMANS on Caledonian Road
You can buy it post free (in the UK) from the publishers
And you can order the book at Amazon here ​
The story of Coal Drops Yard mirrors all the ups and downs of King's Cross. Built in the 1850s alongside both the canal and the rail tracks to receive, sort and store the coal which powered the capital, it has over the years sunk into something close to dereliction, then bounced back as a vibrant part of the counter-culture (which is what we are focussing on here) and is now reborn as an upmarket retail and leisure complex. The original Victorian structures are astonishing in their scale and ambition and their refurbishment  has come with a sweeping new roofscape, so that the two adjoining buildings now kiss in mid-air.

It is situated between the majestic six-floor Granary Building - one of London's most imposing industrial buildings, completed in 1852 and now the home of Central Saint Martins, part of the University of the Arts - and the equally iconic quarter of transplanted gasholders. This magnificent assembly of renovated commercial structures is the most emphatic aspect of the makeover of the railways lands north of King's Cross and St Pancras stations.

The two coal drops - vast slate-roofed three-level buildings/viaducts/sheds constructed by the Great Northern Railway - were designed for coal wagons to enter on tracks on the top floor and drop their loads into storage hoppers which in turn fed the coal to loading carts below. The need for carriages to have access, and for air to circulate to clear the dust and fumes, meant large spaces and generous open arches. The yards could hold 15,000 tons of coal, the size of the operation reflecting the growing city's hunger for fuel. But discharging the coal in this manner tended to turn too much of it into dust. By the end of the century the greater part of the coal drops buildings had been turned into warehouses.

One of these warehouses was used by Bagley's, a Yorkshire firm which made glass bottles and decorative items and did well from the inter-war demand for inexpensive domestic glassware (they specialised in art deco pressed glass). When the warehouse was taken over by a film company, the name carried on - and the early raves were advertised as at Bagley's film studios. That is the prosaic explanation of how Bagley's, the biggest London rave venue of the 1990s, got its name. In a clever echo of King's Cross's rave era, the new raised walkway from the Somers Town foot bridge over the canal and alongside the coal drops has been named Bagley Walk.

The warehouse was available at a time when legislation, and public attitudes, was pushing bit raves - big dance parties, with electronic dance music and usually  deep, booming bass, and quite often drugs as well - away from open air venues to indoor locations. Bagley's raves launched at the beginning of the nineties. Ryan Perry started going around 1992 when the hard core jungle scene got established and when the building still bore the trace - you might say the stain - of its original use. 'We'd walk out of there literally black. If you rubbed a wall, or if you squeezed past someone, your clothes would be black.' 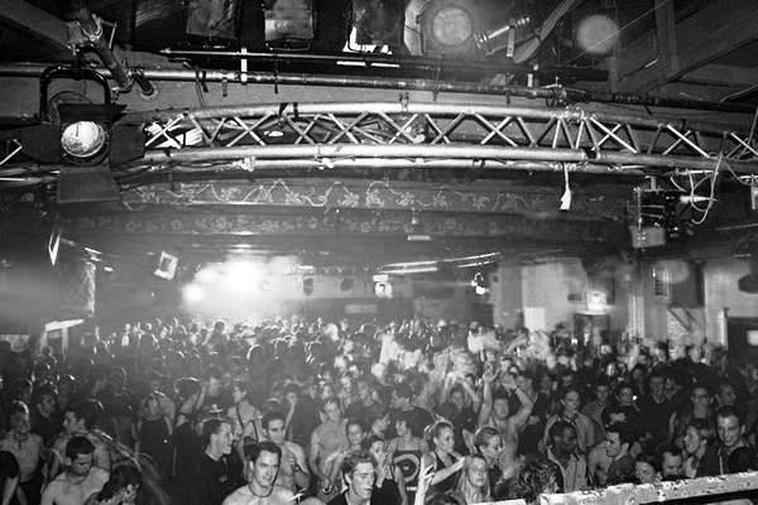 Bagley's in 1994 - photo courtesy of DJ Andy Ward
​Bagley's not only benefitted from a great city centre location, it also had space - lots of it. There was a capacity of 2,500, which was sometimes - and perhaps recklessly - exceeded.

'First time I went in there - to a Double Dipped night - I was blown away. Thousands of people rolling round the gaffe, four rooms, a nice outdoor area where you could lie around and get fucked in those days.' Towards the end of the nineties, Perry put on his own weekly Best of British nights at Bagley's featuring jungle drum and bass. 'I've got extremely good memories of it - from partying and from putting on my own events, and going to other events. Some real big action there'

'You'd walk in to what was generally known as the gold bar or foyer bar and there would be a DJ spinning some tunes. Upstairs you would be right in to the main room, which could take 950 people - bare brick walls, painted purple. Amazing space. Though there was no air conditioning!'
On Saturday nights, Bagley's hosted the Mud Club - which brought a touch of decadence, surrealism and design flair to the rave. And for those who revelled in the club scene, Bagley's was both a great venue and a place where new styles could emerge.

'Bagley's opened up the hardcore drum and bass crowd to the garage genres and techno due to the amount of rooms', recalls A.J. Dizzy Taylor. 'It allowed us all to mix together under one roof. I'm still friends today with people I met there.'

'There was a small section that wasn't a music room. It had stalls and a photo booth - this was like a chill-out area in the days before the smoking ban. That was another thing that made Bagley's unique. Back then most venues were just indoors and at many other clubs if you wanted to go and get some fresh air, you were told there was no re-entry. Bagley's was the venue where people could stand outside and chat and congregate. It was the people's venue.'

Alongside the regulars was the much larger number who came to Bagley's once or twice, awed by the size and the crowd and the sweat and the noise ... and by the sex workers lining the nearby streets. In 2003, Bagley's was taken over by an entrepreneur who also owned a couple of other nearby clubs. It changed name to Canvas, and the last rave there was in 2007.