Curious Kentish Town
​
"Hey Ho, Cook and Rowe"
to stimulate your appetite, we are posting here an extract from Curious Kentish Town -
we will change the extract every so often, so do keep coming back
​And you can buy the book here 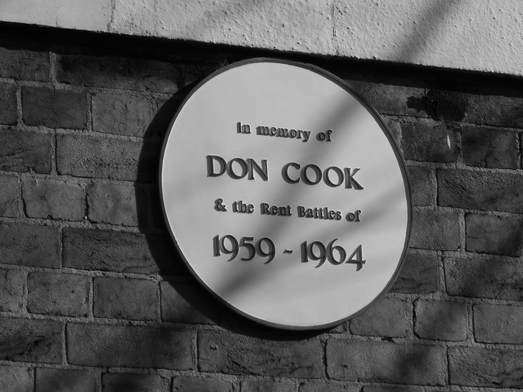 A plaque on the wall of Kennistoun House on Leighton Road reads: 'In memory of Don Cook and the Rent Battles of 1959-1964'. It’s not a blue plaque, nor indeed the handiwork of the council, but a tribute to one of north London’s most tenacious campaigners on behalf of council tenants. This was the setting of his biggest battle with the authorities.

In the mid-1950s, St Pancras Borough Council was a by-word for municipal radicalism, and famously flew the red flag from the town hall on May Day. That came to an abrupt end when the Conservatives won the 1959 council elections: ‘Council Rents Up, Red Flag Down, Closed Shop Out’ was the headline in the North London Press.

The rent rises were resisted by a borough-wide tenants’ movement largely led by Communists such as Don Cook and Labour left-wingers. In January 1960, more than a thousand St Pancras tenants staged a partial rent strike, paying only the old amount. The council issued hundreds of eviction notices, and by the summer – partly because of falling support and partly a tactical decision – only a handful were still on rent strike, notably the two ‘rent rebels’, Don Cook, an engineer at an aircraft factory, and Arthur Rowe, a waiter.
​
At the end of August, both men barricaded themselves into their flats – Don Cook at the top floor of Kennistoun House, and Arthur Rowe at Silverdale House on Hampstead Road. The issue caught national attention. On Leighton Road, Cook and his supporters used old pianos, doors and barbed wire to fortify the flat, and even placed an iron bedstead on the roof. Cook is uppermost of the two men featured in this wonderfully dramatic image from a Pathé news reel. 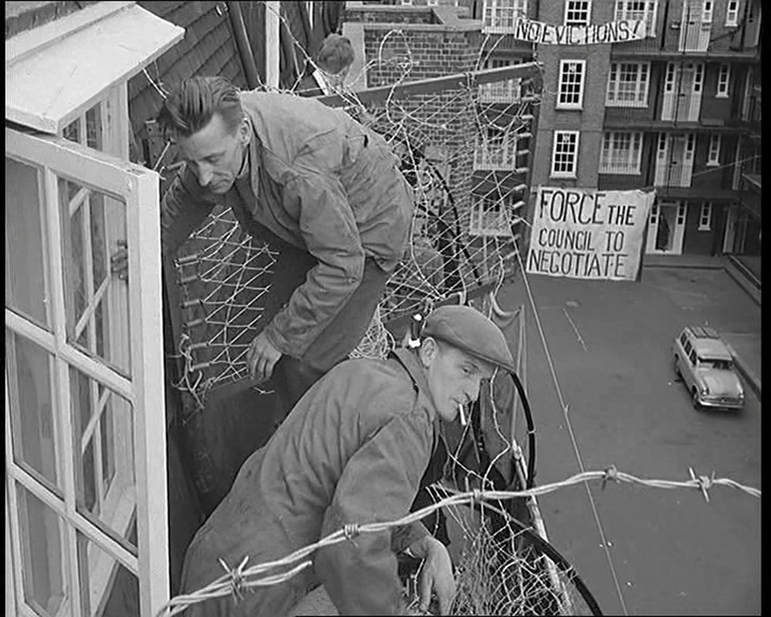 Courtesy of British Pathe
Edie Cook, Don’s wife, stayed at a friend’s flat on the floor below, ready to sound a ship’s bell to mobilize support if the bailiffs approached. At first light on 22nd September 1960, the bell sounded - hundreds of police had sealed off the area and the evictions were underway.

At Hampstead Road, Arthur Rowe was winkled out after the bailiffs smashed a hole in a brick wall. The battle at Kennistoun House was more keenly contested. ‘Four bailiffs escorted by police raced up the stairs to Mr Cook’s flat,’ reported The Times, ‘but were kept at bay for nearly 30 minutes. Oil was thrown at them they were struck at with sticks and one bailiff received a head wound when he was hit by a fish tank.’

The bailiffs eventually forced they way in through the ceiling of a back bedroom. They found Don Cook and a friend having a cup of tea at the kitchen table.

The forced evictions galvanised the tenants and their supporters. That evening thousands marched on St Pancras town hall and faced police apparently keen to get their own back for the indignities they had faced that morning.  ‘Truncheons Out in St Pancras’, was the headline in The Times. Dozens of protesters were hurt and scores arrested. A news reel entitled ‘Eviction Battle On!’ – you can find it on YouTube – said of the clashes: ‘There has been nothing in London on the scale since the hunger marches of nearly thirty years ago.’
​
The following day the government took the rare step of invoking the Public Order Act to ban all demonstration in St Pancras for three months.

Don Cook and Arthur Rowe captured the attention of the renowned folksinger Peggy Seeger, who wrote and recorded (with her partner, the equally great Ewan MacColl) ‘Hey, Ho, Cook and Rowe’:
​
Hey, ho, tell them no
With a barb-wire fence and a piano,
Took a thousand cops to make them go,
Three cheers for Cook and Rowe!
It’s not the world’s greatest protest song, but hey (ho), it’s by Peggy Seeger and it’s about a Kentish Town rent strike – and that’s not bad!

And what happened next? Labour swept back to power at St Pancras in 1962 on a promise to rescind the rent rises … but never fully delivered. So the rent battles carried on, but not quite with the same ferocity.
​

and details of Curious Camden Town

and all you need to know about Curious London