​'It was a wonderful campaign, an admirable campaign - incredibly well organised and very enjoyable', says artist and writer Lynn MacRitchie. 'You met a fantastic range of people - people who believe in something'.

A long-running campaign too - and that rare beast, one that the campaigners won.

MacRitchie is looking back forty years to the struggle to save the Elizabeth Garrett Anderson hospital, one of only a handful that were for women, by women - so all those seeking treatment there knew they would be seeing a woman doctor or consultant. After five years of uncertainty and three years of vigorous campaigning, the EGA was given a reprieve and stayed on Euston Road - not forever, but for another twenty years or so.

For a year or two, MacRitchie spent just about every Monday evening at the EGA. The doctors, nurses and support staff staged a 'work-in' and occupied the hospital. Campaigners mustered round-the-clock, a permanent picket to ensure that there was no out-of-hours attempt by the health authority to wind-down facilities. 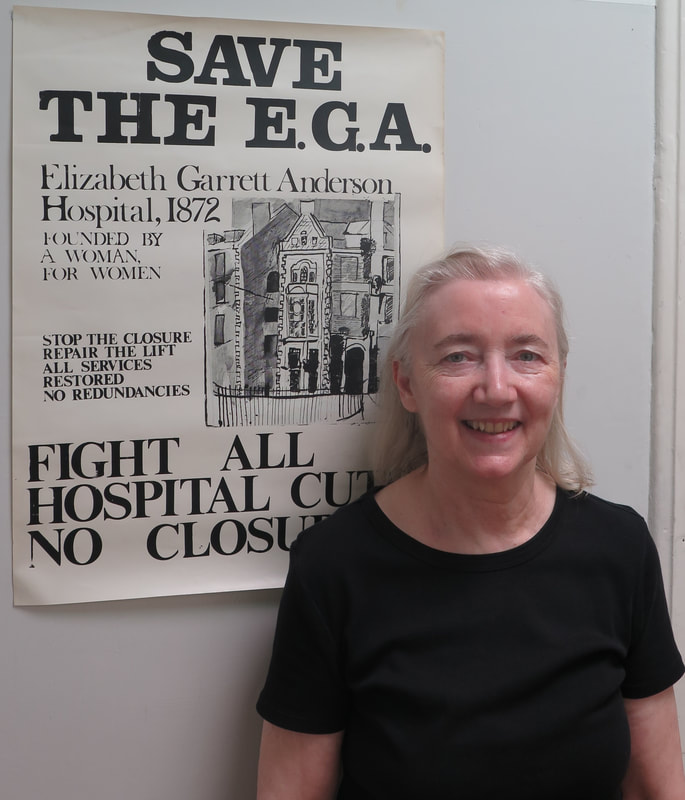 Lynn MacRitchie with the 'Save the EGA' poster she designed
Lynn MacRitchie's regular slot on the picket rota was Mondays starting at 6pm. She would come early and eat in the hospital canteen, and then spend the evening with the same two fellow campaigners - one a dockers' shop steward and the other a radical feminist. The 'Save the EGA' campaign brought together doctors and shop stewards, anti-cuts campaigners and women's groups, the old left and the new left. It cut across the usual political fault lines: a Labour government sanctioned the hospital's closure and a Conservative government saved it.

Elizabeth Garrett Anderson had become, in 1865, the first woman to qualify in Britain to practise medicine (James Barry, assigned the female gender at birth but living as a man, had qualified decades earlier but that hardly diminishes Garrett Anderson's pioneering status). Eight years later, she became the only woman member of the British Medical Association, which promptly changed its rules to bar any other women from joining.

The dispensary at which she worked became the New Hospital for Women, which in 1890 moved to purpose-built premises on Euston Road. Elizabeth Garrett Anderson died in 1917 and the following year the women's hospital was renamed as a tribute to her. In the 1970s, it had more than a hundred beds, operating theatres and a range of activities which extended well beyond gynaecology and obstetrics. But as far as the local bureaucracy of the NHS was concerned, it didn't quite fit - a small, stand-alone institution many of whose patients came from beyond the local catchment area. The increasing Bangladeshi presence in the locality brought with it more demand for women patients to see women doctors, but that wasn't factored in to the decision making.
The hospital staff set up an action committee, an at times uncomfortable alliance between doctors and consultants on the one hand and on the other staff organised by the left-leaning National Union of Public Employees (NUPE). In November 1976, they decided to occupy the hospital. 'Pickets "guard" the door all day to ensure that there is no sudden attempt to move patients or equipment to another hospital', the Daily Telegraph reported. 'They are understandably wary of the authorities, who closed down the hospital's maternity home in Belsize Park at an hour's notice.' Staff were working 'in almost impossible conditions' but daily clinics were continuing 'and patients are cared for before and after their operation in other hospitals in the three first-floor wards'.

Lynn MacRitchie lived nearby in a squat on Northington Street and then at Huntley Street but had never been referred to the EGA nor knew of it. She worked as a domestic assistant at the Royal Free Hospital in Hampstead where she was a NUPE shop steward, but she spent as much time as she could with the Poster Collective based at another local squat in Tolmers Square. Through her involvement in the women's movement, in housing campaigns, as a trade unionist and as an activist artist, she was drawn to the EGA campaign, designing some of the posters and lapel stickers which were so effective in getting the message out: 'EGA Stays OK!'.

A key success was the involvement of local tenants' groups - indeed they were the bedrock of the movement. Linda Clarke was a council tenant on Cromer Street and working on a doctoral thesis about the development of Somers Town. She was also an anti-cuts activist. She became the lynch pin of the Save the EGA campaign. 'It was hard work. I spent bloody hours on it. I've still got the picket rotas somewhere. It was a time when there were lots of occupations - but I don't think anybody had tried to occupy a hospital.'

She says she learnt a lot. 'We had to combat that feeling that: oh well, it's all lost. It was an uphill struggle. We'd go to meetings with the health authority which were 95% depressing and 5% positive and we'd immediately go to the Camden Journal and tell them about the positive bit.' And the EGA campaign linked in with other attempts to save hospitals from closure - activists recall visits to Hounslow and Plaistow, so tjhat the strength of oen campaign could revitalise others.

It worked - even the Telegraph was obliged to declare that 'almost every women's organisation in the country has offered support'. So too did the only woman politician who matched Barbara Castle in charisma and profile. Margaret Thatcher declared that she was 'a staunch supporter' of the hospital. Within days of the Conservatives' election victory in May 1979, the new government announced that the EGA would be upgraded on its Euston Road site. £2 million was to be spent on providing a 40-bed gynaecological unit and 18 day care beds. This wasn't the sizeable general hospital for women that the campaigners had sought - but it was victory. 'Yes, I felt elated', MacRitchie recalls. 'We all snorted that it was a Tory government that reprieved it. But we wanted a hospital for women to be kept open, and it was. And if we hadn't campaigned, it would have closed for sure.'
​The EGA kept going until 2000. Its name survives in a wing of nearby University College Hospital. The Euston Road building, which once faced demolition, is still standing - and in one of those wonderful quirks of history, it's now the national HQ of the trade union UNISON, a direct successor of NUPE.

The entrance hall of the old hospital and an adjoining room are now a small memorial to Elizabeth Garrett Anderson and the institution that took her name. It's worth popping in, though not many do - the displays and decor are well intentioned but a touch sepulchral. 'I don't think a lot of people are aware it's there', laments Linda Clarke, now a professor at Westminster Business School. 'A lot of UNISON people aren't even aware it's there!'

And of course, what the 'Save the EGA' campaign wanted was a hospital for women not a memorial to it.
​
Here's the Curious King's Cross front page