Shortly before Christmas 1962, a twenty-one-year old American pitched up at a folk club held at the 'Pindar of Wakefield', a pub towards the northern end of Gray's Inn Road. The bouncer on the door was minded not to let him in, but Peggy Seeger - who ran the club along with another soon-to-be folk legend, Ewan MacColl - insisted that he should be admitted.
​
The visitor played a couple of songs in the 'open mic' second-half of the evening, extending well over the normal five minutes allocated for such contributions. And the songs he played? Well, no one is absolutely sure - but one of those present recalls hearing 'Masters of War' and a protracted version of 'The Ballad of Hollis Brown'.

Bob Dylan at the 'Pindar of Wakefield', 22 December 1962 - photo by Brian Shuel, who has given permission for it to be posted here
​This was Bob Dylan on his first visit to Britain. The pub, now called the 'Water Rats' (it was bought in 1986 by an entertainment industry fraternity-cum-charity called the Grand Order of Water Rats) is still a music venue. And it loudly proclaims that it hosted Dylan's first British gig. Mind you, it also says that both Karl Marx and Lenin drank here - claims which, a bit like the Dylan one, may be true but are from watertight. 'Definitely Maybe', in the words of the Oasis album title - a band that really did play its first London gig here.

By the time Bob Dylan arrived in London, he had released his first album (which only sold a few thousand copies) and had recorded much of his second, including the classics 'Blowin' in the Wind', 'A Hard Rain's a Gonna Fall', and 'Don't Think Twice, It's Alright'. 'The Freewheelin' Bob Dylan' was eventually released the following May. His performances in the folk clubs and coffee bars of New York's Greenwich Village had burnished his reputation. He was getting noticed - and had in Albert Grossman a new manager with a knack for making stars. 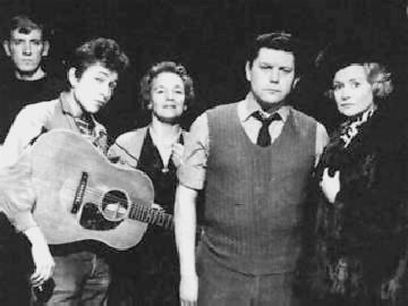 The cast of Madhouse on Castle Street
That's probably explains why the BBC paid for Dylan to come over at the close of 1962 to take part in a TV play, 'Madhouse on Castle Street'. He couldn't act, which seems to have come as something of a shock to the play's director, but four of his songs featured in the drama. No copy of the programme survives - with culpable stupidity, the BBC wiped the tape in 1968 even though Dylan had by then become a superstar.

While in London, Dylan played no formal concerts, but he did get involved in the very active folk and blues scene and, guitar in hand, turned up at several club evenings. It's difficult to be sure where he first performed in public. Some suggest that it was the 'King and Queen' in Fitzrovia; one Dylanologist believes it may have been the Troubadour coffee house in Earl's Court. But his contribution at the 'Pindar of Wakefield', on 22nd December at the Christmas get together of the Singers' Club, is the one most talked about - not least because a photographer, Brian Shuel, happened to be in attendance.

The Singers' Club had a reputation for a rigid insistence on authenticity in folk music, while Dylan was moving away from singing the folk canon to writing his own compositions in a style influenced by traditional folk. Ewan MacColl was later rudely dismissive of Dylan, and the photos taken that evening are - some folk music experts insist with a smile - the only ones with the two singers in the same frame. (MacColl is on the far right of the photo with a beard and his eyes shut - the bald man above Dylan's head is the renowned A.L. 'Bert' Lloyd). Dylan too wasn't always smitten with the music he heard played, and at another London venue, perhaps after imbibing too much, he loudly dismissed the singer on stage as 'fucking shit'.

But where was that first public performance? Brian Shuel says that four days before the Singers' Club Christmas 'do', he was at the 'King and Queen' to photograph Martin Carthy when Dylan turned unexpectedly and sang a couple of songs. So that sorts it! Not quite - because as Shuel himself says, there's a suggestion that Dylan came to an earlier session of the Singers' Club at the 'Pindar of Wakefield' and, after an informal audition, was allowed to perform a single number. It's one of those mysteries which is unlikely ever to be settled.
​
While on this side of the Atlantic, Bob Dylan met such luminous talents as Martin Carthy and Bob Davenport and critics agree that his exposure to English folk music helped to shape the sound and style of Dylan's music. Such classics as 'Girl from the North Country' and 'Boots of Spanish Leather' are seen as bearing the mark of his few weeks in the UK.
The Water Rats is on firmer ground in insisting that it hosted the Pogues' first ever gig in October 1982. Although the band is often regarded as quintessentially Irish, the King's Cross area was their home patch. Shane MacGowan was living at the time in a short-term let above a corner shop in Cromer Street, and had already been banned from most of the local pubs; two others of the original line-up were dossing nearby in Whidborne Buildings.
With their debut gig looming, the band plumped on the name Pogue Mahone, a phrase lifted from James Joyce's Ulysses which means kiss my arse in Irish Gaelic. They later became simply the Pogues because some at the BBC were reluctant to play their music after complaints (mainly from speakers of Scots Gaelic) about the vulgar name.

The Pogues secured a weekly slot at the pub - 'raucous events' according to one of the band. And it's where they met to discuss plans and to drink. The accordionist, James Fearnley, at first saw the band as 'not much more than a product of our locality, of the sisterhood of grim tenement buildings on Cromer Street, and the Norfolk Arms, the Boot and the Pindar of Wakefield.'

Their first single, 'Dark Streets of London', was all about drinking, gambling, singing and then, when winter sets in, finding - ' 'm buggered to damnation, And I haven't got a penny, To wander the dark streets of London'.

It sounds like an elegy to their time in King's Cross! ​ 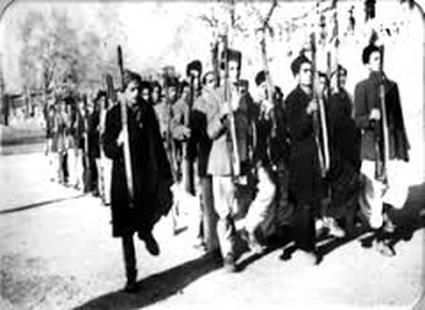